Let me tell you the story of Mr. Plant. T’s what I call a little tomato plant I have. I got him a year ago at a community garden where I volunteer. He was not doing well and they were going to throw him away. It made a lot of sense, but when I saw him, I just felt bad for him. I had to take him home and try to give them a new life.

So that’s just what I did.

Luckily, I had some spare fluorescent grow light bulbs lying around from an old project. So I decided to move Mr. Plant away from the window, where it was a bit cold and put him in the middle of my apartment. I surrounded him with fluorescent light bulbs.

Let me have a quick interlude here and talk about florescent grow lights real quick. A lot of people think florescent lights only work for very young plants, like seedlings and sprouts. That is not true. 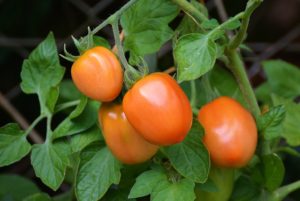 Florescent lights can both grow and even flower plants. That said, they are not as efficient as HID grow lights or LED grow lights, which is what you’d use for a full hydroponic grow operation. But they are much more readily available and much cheaper to buy. Even though they cost a little more to run, if you only have a plant or two, you end up saving a ton of money using fluorescents.

And that is why I used the florescent bulbs on Mr. Plant. Well, that and the fact that I had them already and didn’t have to buy new ones. They were just your standard compact fluorescent bulbs and were only about 60 watts each.

They were a warmer color spectrum, which means they would work well for all stages of growth (I think they were around 3000K). After few weeks with these lights, and a lot of loving care, Mr. Plant made a comeback. He came back to life. Now, a year later he even gives me a few tomatoes. It is wonderful.

Apart from adding the florescent bulbs, I also gave him nutritious soil and added a few extra nutrients in there occasionally. I even fed him some tea. That’s an old trick my aunt used to use. She used to brew a nice cup of tea for herself and always make a bit extra for her favorite plants. She swore by it. I don’t think it really makes a difference, but I don’t think hurts them either, so why not give them some tea. I enjoy it, why shouldn’t they.

Anyway, as mentioned, Mr. Plant is back in commission. At this point, he not only looks green and healthy again, but he is also producing wonderful ripe red tomatoes. And those tomatoes taste amazing. They are so much better than anything you could buy in a store.